On May 19, 2015, the Los Angeles, California city council voted to become the latest city to establish a minimum wage, increasing from $9 to $15 per hour.  This is a 76% increase by to be phased in by 2020. In addition, Los Angeles County is considering a similar measure that would affect employers in unincorporated areas of Los Angeles.

What do Business Owners Think?

According to an article in the New York Times
Opponents of higher minimum wages, including small-business owners and the Los Angeles Chamber of Commerce, say the increase approved Tuesday could turn Los Angeles into a “wage island,” pushing businesses to nearby places where they can pay employees less.

“They are asking businesses to foot the bill on a social experiment that they would never do on their own employees,” said Stuart Waldman, the president of the Valley Industry and Commerce Association, a trade group that represents companies and other organizations in Southern California. “A lot of businesses aren’t going to make it,” he added. “It’s great that this is an increase for some employees, but the sad truth is that a lot of employees are going to lose their jobs.”

The trend towards local (city and county) based minimum based wages has been growing. 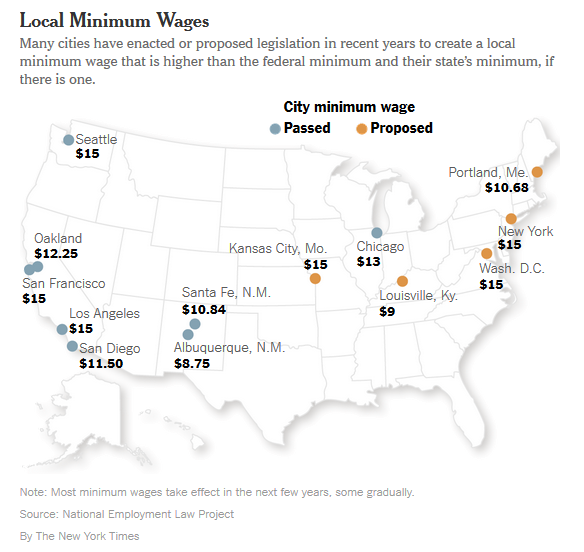 Where Does It End?

According to citymayors.com as of May 2015, there are 19,429 municipal governments in the United States and 3,143 counties.  In the future each city and county government could declare that it is empowered to set wage bases for every employer in their area. Employers across the nation will be faced with a constantly shifting set of minimum wage rules set for each area in the country.

Since PEOs provide a payroll service as a core part of their offering, Professional Employer Organizations with large and diverse geographic coverage areas will be tracking and implementing compliance policy for their small and medium sized business clients.  This is yet another real life example of when more rules and regulations are piled on businesses, the more valuable having a PEO partnership becomes.